Busy, yes that is definitely the word to describe the month of June! We headed back down to Jupiter twice, once to put the tail back on the R44 (I even helped turn a few wrenches this time!) and a second time to drop Ben off ahead of a ferry flight to Omaha, Nebraska. Ben finished up the Rotorcraft ground school and has started working on his CFI binder. Ben turned 30 and we had a visitor from YWAM come through on his way to dropping a truck load of Haiti aid to the port in West Palm. Here are some highlights:


Ferry Flight
Ben flew an R44 up to Omaha, Nebraska where it will be crop spraying. The flight was a wonderful opportunity to build time on a new type of helicopter. To meet the special requirements to fly the R44 he first had to take 5hrs of instruction and receive a sign-off for his logbook. These were the first instruction flights in quite a while and were great to have before flying the aircraft cross-country 1,300+ miles! A second pilot named Jack also went on the flight and Ben enjoyed the company. With the 5hrs of instruction and the ferry flight Ben has about 11 hours in the R44. Hopefully timing will work out and he can fly the aircraft back down to Florida in August and add a few more hours. If he wants to instruct in a R44 he'll need 25hrs total. 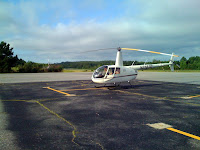 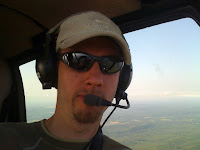 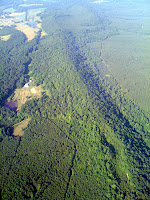 Ben's 30th birthday!
Amid the absolute chaos of June Ben turned 30! He's been asking to go jet-skiing for years so with some good friends we headed out to Merritt Island and splashed around the Indian River at 55 miles an hour. It was great fun! Afterward we headed to the beach then out to lunch at Tiajuana Flats. In the evening our friend Chris put on a fabulous murder mystery dinner. Ben “Bo Jalais” turned out to be the killer! 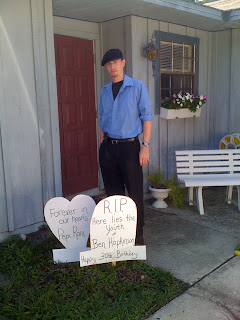 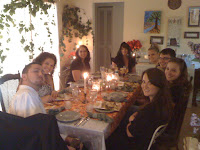 Visit from James
The YWAM visitor with Haiti relief was James Ferrett one of Ben's school friends. James and his wife Kelly serve on the YWAM base in Madison, Wisconsin. James drove a truck with a 25ft box filled with medical supplies, food and clothing down from Wisconsin to drop at the port in West Palm. A long trip for a truck with air conditioning that only worked when the truck was at idle! 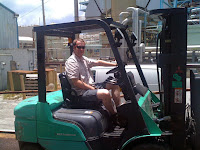 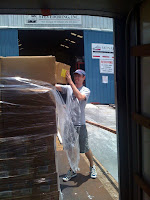 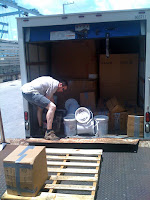 So that's it for June. July is already shaping up to be another busy month, but promises to have lots of fun in store for us! Ben will continue working on his CFI binder and on the 11th we'll get the first of our 5 UK visitors. I hope they all bring chocolate! :)
Posted by Ben and Anisha Hopkinson at Saturday, July 03, 2010