Did all that really happen in just two months?

Have you ever had the feeling that you aren’t making any progress and then one day you realize that a whole lot was actually happening? That is exactly how I would describe the last two months.

For starters Ben and I celebrated our 8th wedding anniversary on October 5th! We had a wonderful dinner at a Brazilian steak house in Orlando. Very delicious but I left feeling like I’d consumed my lifetime allotment of skewered meat all in one night.

Then at the end of October (in the midst of all his studying) Ben became a US citizen! We submitted the application in late July and on October 27th he was called to the USCIS (U.S. Citizenship and Immigration Services) office in Orlando for an interview and civics test. Passing with flying colors he was then scheduled for the oath ceremony two days later. On October 29th I snapped as many pictures as I could while Ben stood with right hand raised and pledged an oath of allegiance to the US. Exciting stuff! So now all our US visa woes are over. Ben has all the rights of a citizen that was born in the US with the exception that he can’t run for president. And just in case you were worried, he still gets to keep his British citizenship! Soon he’ll have two passports, one red and one blue. 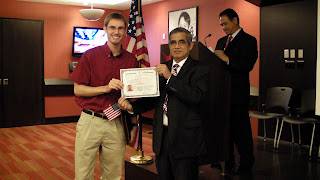 On November 10th we got to see James Ferrett who came down with a DTS (Discipleship Training School) to attend YWAM’s 50th anniversary celebration in Orlando. We met up at the new YWAM base, went for dinner at Steak N’ Shake and then back to YWAM for the main event. Loren and Darlene Cunningham (founders of YWAM) were in attendance and it was great to hear them speak. 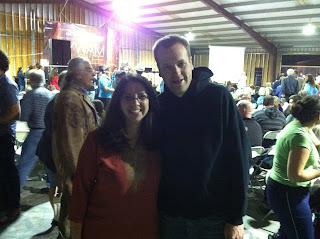 Of course the really big news is that Ben is now a Certified Flight Instructor! That’s right folks, if you want to learn to fly a helicopter Ben is now qualified to teach you! This was the last major course and it is a big relief that it is complete. In the flight training world the final exam is called a “check-ride” and consists of an oral exam and a flight test. Ben’s oral exam lasted from 9am-3pm! That’s a whole heck of a lot of testing! He was scheduled to fly directly after but the weather made a turn for the worse and the flight was rescheduled for the following day. When we woke up the next day the weather was still terrible. After a morning of praying the weather cleared within an hour of his flight (it got worse again later). He was able to finish off the check-ride and come home with his temporary certificate in hand. A couple of months and the official one will come in from the FAA.

So now on to the last course! The final course to take is the Certified Flight Instructor Instrument (CFII). This is a short course and should be relatively easy to accomplish. Ben hasn’t flown instruments in a long time though so will take a bit of brushing up.

We’ll need you to please keep us in your prayers over the coming months. Ben will apply for a job at the helicopter school where he’s training (this is the same place I work and where he previously worked as a mechanic). Working at the school would offer lots of opportunity to build flight time and experience while being paid. That said we are under no illusions here, the school hasn’t been hiring a lot of new instructors this year with the economy and student financing suffering as it is. So please do pray for us in this. We’re open to whatever God has in store, but also have our own ideas of what we’d prefer!

You’ll remember a blog post from summer when Ben went down to fly and do a bit of maintenance with Samaritan Air. That opportunity still exists, but the flying isn’t really pre-scheduled or guaranteed. It’d be wonderful experience but is very dependent on whether someone calls to hire the helicopter. It may be that Ben travels to Jupiter during the week and then comes home on the weekends.

Thanks for all your prayers and support!

Here's a quick run down with what Helimissions requirements are and how far along we have come: