Jeffrey and Eric
A couple weeks ago we participated as a host family in an Education First (EF) homestay program.  As part of the program kids come from all over the world to learn English and experience American culture. Our group of EF kids came from China and we enjoyed the roles of British/American parents to Eric and Jeffrey. Both are 13 years old (Jeffrey turned 13 last during the two weeks with us) and both are really great young men! Sure they are quiet and Jeffrey is a bit shy, but I think that has mostly to do with his lack of confidence in his English skills.  Eric’s English is much better as he spent time in New Zealand last year and so is able to act as translator when needed.
We took the boys to watch sea turtles come up the beach to nest, shopping at the mall, had a pool party, taught and played card games, celebrated Jeffrey’s birthday, and capped off with an afternoon at the beach. We were impressed by Jeffrey’s insane skills with the Rubik’s Cube and Eric’s piano playing. And so you can be impressed too I’m including the videos!
Settling into the new job
Ben is working crazy hours and trying to cram as much info in as possible, but is at the same time doing very well! He’s finished up the orientation process and his 141 checkout with the Chief Pilot. The checkout is the official “aok” and allows him to start flying with students. When he called me after everything was over the first thing out of his mouth was, “Well before that flight I used to think I knew how to fly helicopters!” But the flight couldn’t have been quite that bad because the Chief Pilot was pleased with how things went.
To date Ben has flown with two other new instructors familiarising them with our local area and procedures, a few flights with a student who was having a little bit of difficulty and needed a “fresh approach”, and started with his one actually assigned student. Hopefully he’ll be given more students with the new class starts on September 12.
Ben’s also one of the flight instructors who teach in the ground school classes. Ben’s subjects are Charts and Aerospace for the Private Pilot class and Systems and Components for the Commercial Pilot class. Last week he had his first go teaching the class by himself and felt it went well. I was so proud of him! Next week he’ll be teaching some more in Private and also in the Commercial class.
Even though his 141 checkout was completed Ben stills needs to be checked out in the R22 and R44 (two other types of helicopters) and for instrument instructing. He’s done one flight in the R44 and needs one more before going up with the examiner. It will be a few more weeks before he has completed all the necessary checkouts and can just focus on instructing.
This whole move from student to instructor has been a funny transition for me. I find myself wondering at Ben “Who are you and where did my husband go?” I mean imagine with me – My Ben classroom teaching…and enjoying it?! I am immensely proud of him and know he is a good pilot, but my brain just hasn’t quite realized that he is the teacher now! 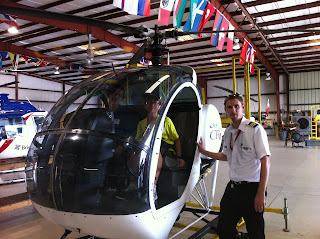 Adoption
It’s been a really frustrating month. We returned from Clarkston and attempted to contact our case worker, Dawn,  to finish up the home study. We had agreed with her before we left to turn in all our paperwork so she could write the home study while we were away and plan to wrap everything up in August. I couldn’t reach Dawn on her work number, cell, or e-mail. After a few attempts I called the main office and left a message for the Director. She called me back and explained that there have been changes at Intervention Services, Dawn no longer works there, but I shouldn’t worry because Dawn is still contracted to complete our home study. The Director told me she had Dawn’s new contact details and would give Dawn a call and ask her to contact me the next day. No call came, so I called the Director back. She would promise again, and again I wouldn’t receive a call. I was polite and courteous, but still calling the Director every day to ask for an update. This went on for weeks and I never really got any good answers as to why Dawn wasn’t calling me back.
Finally on one last call the Director said she would insist to Dawn that she contact me as “this really needs to stop” she sounded quite exasperated. I again thanked her for all the help she’d given me and told her that I know there are issues at the moment but I really appreciate her allowing me to call for updates. The next day Dawn did call and as suspected, there was much more to the story. Turns out Intervention Services lost the contract with the county and so no longer was on the books to do home studies. As a result of the lost contract there were a lot of staffing changes and Dawn went to work for another agency. The county asked Intervention Services to still complete the home studies that were pending. However, Intervention Services did not write a contract for Dawn and so as she wasn’t employed by them had no access at all to our file. She couldn’t have contacted us if she wanted to and I suspect the Director wouldn’t give me Dawn’s contact information because Dawn would tell me she can’t do anything until this mess is sorted out. Well, by the time I did hear from Dawn she still didn’t have a contract with Intervention Services but was feeling confident that one would be coming soon because the Director released our file to her (even though she wasn’t supposed to, and probably only because of my daily pestering).
So now Dawn has our file and I also resent our documents to her new work e-mail. That was last weekend and I haven’t heard from Dawn all week. I’ll give a call on Monday to see where we are at, but I suppose this means there still isn't a signed contract. The whole situation is frustrating. Hopefully this won’t continue for too much longer!
Posted by Ben and Anisha Hopkinson at Saturday, August 27, 2011